“‘Tis not right, a woman going into such places by herself.”* – A Book List

As promised, here’s the list of books containing older women as important characters that my friends and I came up with on Twitter a couple weeks ago. Clicking on the photos will take you to the book’s Amazon page.

Another book was brought up in our conversation that hasn’t been published yet: The Great Way, an epic fantasy trilogy by Harry Connolly. It’ll be out later this year.

@chrysoula @MFennVT I'll be releasing one later this year because I couldn't find one I wanted to read.

And, to finish up, these are the Discworld books that involve Granny Weatherwax and Nanny Ogg. To quote Wikipedia:

[Weatherwax] has starred in six Discworld novels (Equal Rites, Wyrd Sisters, Witches Abroad, Lords and Ladies, Maskerade and Carpe Jugulum), has appeared briefly in Wee Free Men, acted as a significant supporting character in A Hat Full of Sky, Wintersmith, and I Shall Wear Midnight, and was referenced in three other Discworld books (by name in Mort, and anonymously in Thief of Time as well as Going Postal). She also appeared in the short story “The Sea and Little Fishes” and in The Science of Discworld II: The Globe.

Nanny Ogg appears in the same Discworld novels as Granny W., as well as the short story “The Sea and Little Fishes.” She also makes a cameo appearance in Thief of Time. Have you read any of these? Are there others you’d recommend? Let us know! 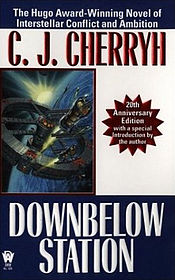 Eleven down, one to go. That’s how things stand with me and the Women of Genre Fiction Challenge I took on back in May. Not sure if I’ll get review #12 posted before 2013 comes to an end, but #11 is here right now.

For some reason, I haven’t read much C.J. Cherryh. In fact, before starting Downbelow Station, I can only remember reading one other of hers, and I don’t even remember what it was. It’s been a while.

Thanks to this Hugo-winning book, I’ll be amending that.

Downbelow Station is the first novel (not including the prequels) of Cherryh’s Company Wars series and takes part in her Union-Alliance universe. Published in 1981, it’s a complicated story, setting up a universe where a giant corporation (Earth Company) has become wealthy exploring the stars, building space stations around uninhabitable planets, all except for Pell’s World, a planet inhabited by the Hisa (called Downers by the humans who inhabit Pell Station, which orbits the planet).

When the novel begins, war has been raging between the Company and the Union, a group of colonists who have chosen to declare independence from Earth and the Company. The Union augments its military strength with clones. The Company has a fleet of warships commanded by Conrad Mazian. There is also a loose confederation of Merchanter ships involved in all this. Pell tries to maintain its neutrality and do business with all three groups: the Company, the Union, and the Merchanters. A crisis point starts the narrative of the novel, with one of the Company warships (led by Signy Mallory) unloading hundreds of refugees from another space station that’s been attacked by Union forces, causing the disruption of the people living on Pell.

There’s a lot more to the novel than that, but if I give you the whole synopsis, you’ll be reading for hours before even getting to my opinion of all that plot. Suffice it to say, there is a lot of political intrigue amongst all the groups and within them, except for the Hisa, who act more as observers than anything else. Or so it would seem.

I really enjoyed Downbelow Station. It took a while to get into as there is a lot of world-building/info-dumping in the first chapter or so, all of which is necessary to give the reader any idea of where they are. The book is a slow read, as well, because Cherryh’s prose is occasionally plodding and there’s just so much going on.

But I think the story makes up for those problems, and it eventually becomes an exciting read. Cherryh does a fine job establishing her universe and the conflicts therein. She also succeeds when working on the smaller scale of Pell Station and Downbelow (as the stationers call Pell’s World), translating the bigger conflicts to a more personal level, with stationers fighting for control of Pell against Union and the Mazianni (the Earth warships) alike. Her characters are decently drawn and she made me care about them.

The Hisa definitely fall into the “noble savage” trope of so much fiction. They’re sentient primate-like folks, assumed to be childlike by the humans that deal with them, but then surprisingly deep when they need to be. While reading, I went back and forth in liking them and not. Ended up settling into the liking them box, mainly because of Satin (Sky-sees-her) and her journey up to Pell to meet “the Dreamer” and see her planet’s sun, something the hisa on-planet can’t do, because their skies are always overcast.

Another thing I liked about the book was that both men and women were in positions of authority without any sexist weirdness. I loved Elene Quen, a former Merchanter married to Damon Konstantin, one of the leaders of Pell. She finds herself back in space aboard another Merchanter ship (hers was destroyed by the Union) and ends up doing significant work to bring about peace talks. This announcement of hers made me bust out crying, because I’m just a dork that way.

This is Quen of Estelle. We’re coming in.

Signy Mallory, the commander of the warship Norway, is also incredibly bad-ass and I would love to see Sigourney Weaver play her, if a movie was ever made of Downbelow Station. It would be a fun film, for a lot of reasons. I’m kind of surprised it hasn’t happened yet. I guess rebooting Star Trek and Star Wars is just that much more profitable, huh? 😉